Urban Inventory #1-4 consists of a series of four billboard posters which create an urban inventory by reading the city and collecting its visible and invisible signs. Close-up fragments of urban writing are recorded in the form of graffiti on walls, stickers on pipes and quotes by Italo Calvino/Michel de Certeau/Walter Benjamin/Geoges Perec/Iain Sinclair/Vito Acconci/Gilles Ivain/Frederic Jameson/Kevin Lynch/Yoko Ono. The fourth poster is a map which traces both the locations of the actual billboards and explores the experiential potential of a readable city. A book What the Billboard Saw / La Ville Mode d’Emploi recordsthe billboards’ own vision of the city.

This project was commissioned by Fri-Art, Centre d’art contemporain/Kunsthalle Fribourg and exhibited on billboards throughout the city of Fribourg from July to September 2005 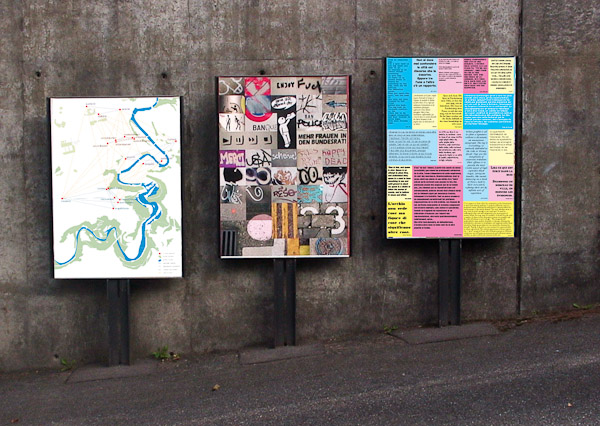