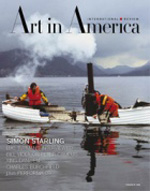 When I met Uriel Orlow at his first solo exhibition at Laure Gellinard gallery in London, the Swiss-born artist gave me a few pointers to decode his latest video work. Orlow’s background (he is from an émigré family) resonates throughout his practice, but he’s eager to point out that he’s worked his way out of the cul-de-sac of identity politics. His work is an open-ended flux of questioning and self-analysis: what’s the difference between a peripatetic artist, an anthropologist, and a tourist? Is history something to be untangled or muddied? Do political tensions get resolved, or just conveniently forgotten?

The video Remnants of The Future (all works, 2010) is set in and around a vast housing project in Northern Armenia that was left unfinished after the collapse of the Soviet Union in 1991. The work explores the post-communist condition as a sort of barren, post-apocalyptic beauty. Static shots linger on incidental detail, giving the work a meditative quality. We see vast, vacant buildings set monolithically against the backdrop of a sweeping mountain range. Birds roost against an amber evening sky; a dog scratches at the dry earth. Only a handful of people live here, and sustain themselves by scavenging for scrap metal: an old man straights a bowed steel rod with Sisyphean patience. He’s slowly, almost gently, dismantled the town he inhabits.

Remnants of the Future is also a science fiction flick of sorts. The fusion of documentary and fictive elements recalls the recent work of the Otolith Group, as well as John Akomfrah’s The Last Angel of History (1995), and Chris Marker’s La Jetée (1962). As the camera roams the carcass-like buildings, a voice rasps in Russian (there are English subtitles): “I am an emissary from the future…” The utopian ambition of this architecture bursts the dam of contemporary reality, outpacing the paradigm of privatisation and ownership exercised in the neoliberal economies of the West. Indeed, Remnants… is shot near the town of Gyumuri, in Mush, a place that Orlow tells me “isn’t on the maps.” It’s a huge conurbation built to house survivors of the 1988 Spitak earthquake that killed tens of thousands. Mush gets its name from a town in Anatolia, which was one of the scenes of the Armenian genocide inflicted by the Ottoman Turks during World War I. When I went to see the show, the latest mega-earthquake was in the news: Haiti had been flattened, innumerable lives lost. The work felt painfully prescient.

Supporting elements in this exhibition include After the End Of History, a first edition dust jacket of Francis Fukuyama’s tome of free market triumphalism The End of History (1992) and Top Lines, a facsimile from the British government’s archives testifying to the UK’s continuing refusal to classify the massacres of 1915 as “genocide.” There are also photographs of the 1988 earthquake. In one of these, Prime Minister Margaret Thatcher stands amongst the rubble of what in retrospect seems like the ruins of communism itself. If these collateral documents often felt superfluous and didactic, the main video piece was Orlow at his best. Here, aftershocks of passing epochs are registered with subtlety and compelling strangeness.