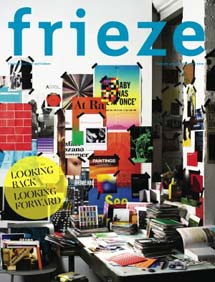 Uriel Orlow, ‘Oddly, one lived the war in one`s mind more intensively than in a country at war’ (detail, 2008)

Uriel Orlow is best known for his contemplative video works that investigate the roles that language, image and memory play in structuring private and collective experience. However, ‘In These Great Times’, his new exhibition at Blancpain Art Contemporain, puts the medium of drawing centre-stage, in the form of a group of 35 marker-pen portraits (‘Oddly, one lived the war in one`s mind more intensively than in a country at war’, 2008) of men and women who clearly belong to another age. Because some of them – such as Bertolt Brecht, Albert Einstein and James Joyce – are immediately recognizable, it is inevitably frustrating that the others, apparently also part of this intellectual elite, elude the naming process. Orlow`s decisions to make the drawings in a small format (28 x 38 cm) and with the graphic sobriety of marker-pen enhance this shift between the tangible and the fragile: whilst encouraging a sense of intimacy with the subject matter, the size and medium render the faces impossible to grasp.

Although some crossed paths elsewhere, the figures featured in the series all frequented Zurich’s Café Odeon, the famous haunt of intellectuals, radicals, asylum seekers and artists. Orlow extends and intensifies his investigation of whether the café`s history can be told coherently with a number of other elements. A pile of newspapers at the base of the wall displaying the portraits is updated daily and opened at reports of conflicts from around the world. Referring indirectly to the involvement of many of the portrayed figures, such as Stefan Zweig and Mussolini, in the two world wars and the role of Café Odeon as a place of verbal exchange, this neat insertion of a contemporary element subtly questions the power of newspapers today to disseminate information.

One of the two videos, In These Great Times (2008), juxtaposes the café being prepared before and cleaned-up after opening hours with scenes of a wood, accompanied by the raucous sound of printing machines, referring to Austrian journalist Karl Kraus` description of the three hours it takes for a tree to be transformed into a newspaper (the title of the video is taken from a 1914 lecture by Kraus). The silent stories contained in the faces are thus fast-forwarded to the present, collapsing the hierarchy of time and opening anecdotal history and current affairs to new associations and chronologies.

Orlow creates images that challenge our desire for understanding and classifying the past and its relationship to the present. In focussing on the appearance and atmosphere of the Café Odeon – the curve of a wooden armchair, a chandelier, a marble tabletop – the video Ornament and Crime (2008) would have been anathema to architect Adolf Loos. His 1908 essay of the same name, in which Loos denounces ornament as a crime against aesthetics, was written in the period of utopian fervour that inspired many of the intellectuals who visited the café. In the context of the portraits, the video questions whether it is possible to unite the material facts of the place with the conversations, ideas and thoughts that occurred there.

‘In These Great Times’ asks whether history and memory should be understood less as being structured by time than as being rooted in a specific place and in the connections made by those present. It is the disparate nature of the project, employing different approaches to image-making, fragments of research and narratives that refuse to be brought together in a single story, that points to ways of translating rather than telling history.