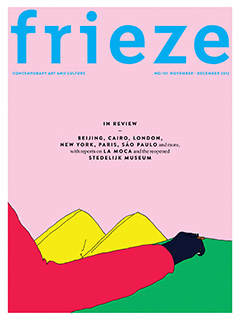 ‘By means of unseen blows, some atoms strike each other.’ Appearing on-screen in Uriel Orlow’s film Holy Precursor (2011), these words are taken from ‘The Dance of the Atoms’, the second book of Lucretius’s On the Nature of Things. An ode to impermanence, this first-century BCE epic describes the universe as constantly in motion: all forms are transient arrangements of atoms that conjoin and are dispersed – by way of the unseen blows from which this concise and considered three-person show took its name – in a perpetual cycle of creation and destruction. Orlow intersperses lines from Lucretius with shots from in and around a Kurdish village in eastern Turkey, the site of the former Surb Karapet monastery. One of the most ancient institutions and sites of pilgrimage in Ottoman Armenia, the monastery was razed during the Armenian genocide of 1915.

The camera meanders through the village, where ramshackle houses have absorbed the ruins of the toppled monastery in new configurations. Incongruously ornate door jambs and intricately carved window sills serve as a quiet reminder that, for all its pretensions to transcendence, sacred architecture, too, is contingent and historical. Outside of the village, women lay flowers in the meadows in a kind of ritual of restitution whose unexplained significance is left to linger. Orlow’s meditation on transience is softly, understatedly mournful, more moving for the light touch with which it handles a heavy theme.

On the opposite wall of the gallery, a suite of four photographs by Mandla Reuter (from the series ‘Prospect, 330 Waldon Pl.’, 2010) documented a place of pilgrimage of a very different kind. Taken from a piece of land owned by the artist in Los Angeles, they capture the city in the hazy in-between hours of dusk and dawn. The skyline is inverted, with the muted silhouettes of distant high-rises and mountain ranges seeming to bleed down into luminous seas, giving the series a dreamily evanescent feel as they edge towards a Rothko-in-miniature abstraction. This inversion is the only nod to a practice more frequently concerned with a Michael Asher-like play of inside/outside, display/concealment within the exhibition context. As with other works, such as A Plot (2011), in which soil from this same piece of Los Angeles was transposed into the dramatic vaulted hall of De Vleeshal, Middelburg, the title of this series is playfully multivalent: the view (or ‘prospect’) from 330 Waldon Place shimmers with the balmy glow of promise and potential, playing cleverly on the landscape’s gold-rush history and its position in cultural mythology as a place where dreams are made and sold.

Toby Christian’s untitled installation intrigued by managing to be both the show’s most concrete piece and its most conceptual. Sheets of green paper printed with a descriptive text could be torn from a neat, wall-mounted A4 block. The text read like an establishing shot – panning through an empty film set with the actors holed-up in their trailers backstage. ‘Two mostly white carrier bags, one inside the other, tied together at the top, are propped against the wall near the corner of a small room, plump.’ There were no bags, of course. Which is not to say that there had not been, or might not be at some future point. And the description, whilst lingering with a certain cinematic intensity on the minutiae of surface, remained curiously, and somehow disconcertingly, non-specific. On the floor nearby, a low and unassuming L-shaped block formed the work’s sculptural element, the only one in the show. This was perhaps intended as a casual perch for the viewer, aiming to specify, or at least suggest, a location for the act of reading. Or, better, it was a plinth, anchoring the textual space in the physical context of the gallery – the imaginary in the real. Apparently empty, it was a fitting pedestal for a show paying quiet homage to ‘elsewhere’ places and unseen blows.